The Hillsdale Market House was founded in October 1941 by Brett Boyd’s great grandfather, Elmer Pearson. The original store was located at 54 North Howell Street. Pearson owned and operated the meat department and Elmer Cain, the grocery department. In 1947, Phillip Williams started working in the meat department. The grocery department was purchased from Mr. Cain in 1951 and a partnership was formed when Lawrence Jacobus joined the company in 1955.

A new supermarket was built in 1957 at 85 E. Carleton. A disastrous fire in June of 1963 gave reason for the complete modernization of that building. Business prospered until a new facility was required, and the present market at 210 W. Carleton, Hillsdale, was opened October 3, 1973.

The present Bob’s Market House, Inc., is the result of the combined interests of Bob’s Super Market, Hillsdale Market House, and Spartan Stores. It was incorporated in 1968 and opened for business April 1, 1969, at 325 Railroad Street, Hudson, Michigan.

In Hudson, it all began when Carl Guss bought out “Webb’s Coffee Ranch” at 225 W. Main Street, Hudson on November 15, 1938. His sons, Don and Bob, joined him in business, which was known as Guss and Sons Market.

On June 1, 1949, they moved into the old theater building at 214 W. Main Street. Carl Guss retired in 1953, at which time Don and Bob went into partnership, and the store was called Guss Brothers. In 1959, Don and Bob dissolved the partnership, and Bob and Edie took over the business under the name Bob’s Super Market. In the 1970s, Williams, Boyd and Spartan Stores purchased our Hudson location. 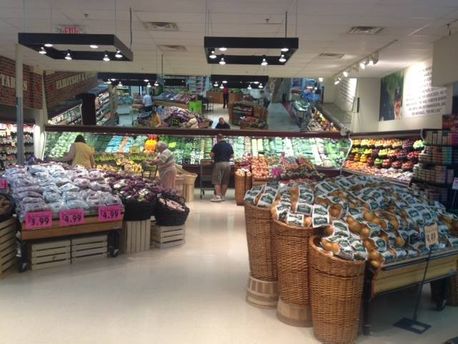 As history has shown, Market House Supermarket is the choice grocery store of Hillsdale, Michigan and Hudson, Michigan, residents. If you would like to find out more about us or have questions about our products or services, please give us a call at 517-437-2100 in Hillsdale or 517-448-3141 in Hudson today!